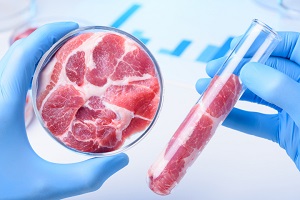 Cultured meat, often referred to as in vitro meat, can be defined as an isotype of artificial meat and is formed with the help of advanced technology that often involves cellular agriculture and tissue engineering. The in vitro meat is processed in the lab by garnering muscle tissues from animal body in the culture media for proper development. To fulfill the growing demand for food by the increasing human population across the world, the laboratory grown meat is offered by its promoters as a healthier alternative for customers who wish to indulge into a more sustainable lifestyle but do not really want to change their diet.

The trend of cultured meat is almost set to transform the food habit of people all around the globe and the food product is expected to be on restaurant tables and supermarket shelves in the very near future. And, yes, it definitely tastes like nothing other than meat, since it is the same meat, only produced in a different way. Especially, with zero animal cruelty, lab-grown meat can definitely be labelled as a clean choice. Most importantly, clean meat buzzes with the potential to put an end to the suffering of billions of farm animals every year.

Nestle SA, the renowned food giant in the world, is getting associated with several other ventures developing clean meat, explicitly bringing up the alliance with Future Meat Technologies, an Israeli organization. The establishment is assessing cutting-edge technologies to yield cultured meat or clean meat components with a number of external start-ups. Such initiatives, in the long-run, would certainly curtail the need for resources and land to rear & nurture animals.

Consumers are gradually switching their focus toward acclimatizing a more nourishing & nutritious diet that is meant to support superior lifestyle with lesser dependence on conventional animal proteins. Especially, people who are allergy prone to animal-based proteins have come up as the major consumer base for alternate proteins.

Moreover, the fact that clean meat entails no antibiotics comes with the possibility to save lives of people to a considerable extent. Excessive use of antibiotics in farming has often been underlined as the potential threat to human health. In case, antibiotics happen to lose their essential efficiency, the modern medicine would mislay their spell just in no time! This is one of the primary reasons why cultured meat is becoming overtly popular slowly & steadily.

According to Allied Market Research, the global cultured meat market is expected to cite a significant CAGR from 2022 to 2030. In the last few years, there has been huge surge in concerns about environmental awareness that covers the aspect of animal welfare to a significant extent. This factor, in turn, has intensified the demand for lab-grown meat, thereby boosting the market of cultured meat substantially. Rise in commercial production of cultured meat has catered to the mounting demand for meat produces. This, quite naturally, has minimized the stress on traditional sources of meat, thus reinforcing the concept of animal welfare.